It’s tennis season, and the wrist, elbow and shoulder problems are unfortunately going to start appearing in the clinic.

This paper might be on the older side, but it’s findings are still relevant for us to understand why we need to consider the lower body in order to solve an upper limb problem.

This tennis study showed that not adequately flexing the knees in the cocking phase of a serve resulted in a 17% increase in shoulder load and a 23% increase in elbow valgus load when compared to players who did flex their knees adequately while serving at a comparable speed.  This is interesting, but what does it mean practically?

The initial energy for the serve begins in the lower zone. To store and release energy, we need to drop the centre of gravity, not just bend the knees. Having flexed at hip, knee and ankle, we then reverse the action, using extensor action to push that energy upwards through the kinetic chain. Just bending the knees creates a backward inclination of the trunk and greater challenge for spinal control, while simultaneously reducing the potential contribution of 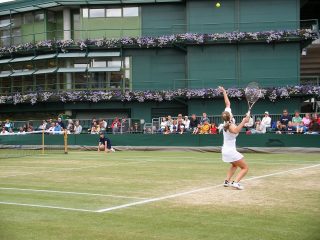 the legs for power. The body self calibrates to find an alternative solution to make up the difference, by increasing the contribution from the upper limb.

I have seen experienced players who have been coached based on this study, and show that very movement – knees moving forward into flexion rather than carrying the body down, so no transmission of force through the kinetic chain, with resulting upper limb injury.

Martin et al, 2014  investigated energy flow in the serve, identifying that non-injured players demonstrated greater energy flow and ball velocity between the trunk and upper limb than injured players, who absorb higher rates of energy in their upper limbs.

Whether you are a medical professional, trainer or a coach, to reduce loading on the arm structures and improve power, we need the lower body to use that concertina action into flexion and extension on the vertical axis (up and down)! That means taking the barbell off people’s shoulders and making sure that they can drop their centre of gravity smoothly, quickly and in balance.

Remember that rotator cuff exercises and scapular stabilisation do not hold all the answers for upper limb pain.  Finding the missing links in the kinetic chain could be the most relevant factor of all.