“It has been my extreme good fortune and pleasure to coach young athlete Jarryd Dunn from the age of 10. By 2012, I had noticed that Jarryd’s movement pattern when running looked disjointed. His rear mechanics extended way beyond a safe distance for his lower back health. Despite visiting several specialists, all experts in their field, we were unable to establish the root cause of Jarryd’s problem. By the time I met Joanne, Jarryd had developed stress fractures in his lumbar spine which meant he spent several months flat on his back. 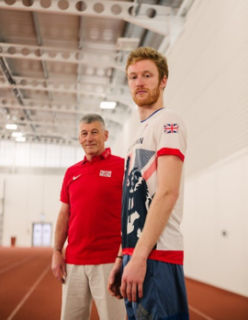 Joanne’s concept of ‘beautiful’ movement was a ‘lightbulb’ moment for me and she changed the whole course of both our careers – I am now much better equipped with the tools to understanding movement and its relationship with performance. Joanne has helped Jarryd and I uncover physical barriers, some of which had been from birth, and unlock the potential for fluent, effortless movement. Jarryd has gone on to become a World Championship medallist (Beijing 2015) and Olympian (Rio 2016).

Joanne and the JEMS® approach has made a huge difference to my approach to coaching and in particular the way in which I monitor the way my athletes move. Her book – Stability, Sport and Performance Movement: Practical Biomechanics and Systematic Training for Movement Efficacy and Injury Prevention is my coaching bible. I believe that without the application of its principles we would fail to optimise the athlete’s potential.”

« « Capacity, capability and preference: what are you seeing? | New course launched! » »
Blog Categories