I was sitting with a patient whom I had not seen for some time. He had made extraordinary progress in developing new movement habits and strategies, and had reaped great functional rewards from his efforts. He had enjoyed greater success in his training and in competition, and things had been going very well indeed. I had waved him off to continue independently two years ago, as he had all the tools he needed, but here he was, sitting in front of me, looking despondent.

Well… life has happened. His child had become seriously ill; his partner had not coped, making him the person holding the family fabric together. Upheavals in the organisation that he worked for had changed his role and increased his work load. A pipe had leaked in his bathroom, causing enormous damage in his home. By anyone’s reckoning, it had been a torrid year.

So how did he present? Unsurprisingly, some niggles had crept back in – a grumbly hip and shoulder had started to complain again. In standing, he was overly erect, with high tension in his back extensors and shoulders held stiffly back. In sitting, he was the opposite, as if he folded in on himself. Tasks that he had mastered were now difficult, and he looked very much like he did before we began all that time ago. He was convinced that all his previous effort was for nothing – that his progress had been lost.

So many people go through this experience. It is how life goes, the ups and downs, the ebbs and flows. We cultivate a fantasy of control, but in reality, it isn’t how in control we are but how we ride the waves that enables us to keep moving through life.

We expect our physical selves to somehow be immune to the emotional and psychological shifts that we go through, and feel as though we are failing if we seem to have lost ground in our fitness and movement.

The first thing to know is that nothing has been lost. Over time and with repetition, we may rewrite some brain pathways, but the information and experience hasn’t disappeared. What has happened is stress. I explained to this patient that his brain has gone into emergency mode, and that this has had several effects. The part of our brain which helps us to process sensory feedback from the body can become inhibited, making us feel disconnected. When we can’t sense ourselves, one of the things we can do is create more noise with muscle tension, which robs us of our movement fluency. Our postural control fluctuates in response to our emotional experience, and he is shifting between the upright tension of withstanding his circumstances, and collapsing into overwhelm when it is all too tiring. He is literally wearing his emotions.

Although he thinks that he needs to start again, he just needs a reboot. I asked him what the first rule of technology is when something doesn’t work. He said that you switch it off, and switch it back on again. Exactly, I said.

So, we settled him into supine, and invited him to switch off, and allow his awareness to float down and settle to the back of his head as it rested on a folded towel. Together we lightly explored the connection of his back and shoulders as they rested on the floor, discovering together the areas which were or were not in contact. We played with breathing, shifting awareness of it from place to place, altering its rhythm, direction and amplitude.

Then in sitting, together we found his feet, once again playing with changing pressure and exploring connection, before doing the same in standing. Together we gently bounced a little through our hips and knees, feeling the sense of the ground under our soles, and the softness in our joints.

We retested his balance and basic low body control and…. he was back. To his relief and astonishment, he felt balanced and stable again. The sun came out in his face.

It could have been so different. Imagine that the conversation followed the “loss of control” thread. How easy it would be to increase the pressure, and the worry. However, armed with a little bit of neuroscience, we can take a different path, the one that recognises the brain’s mighty efforts to cope with what is going on in our lives. We can understand that the brain consumes enormous amounts of energy, and that sometimes some areas become less active as others are having their buttons pushed constantly. 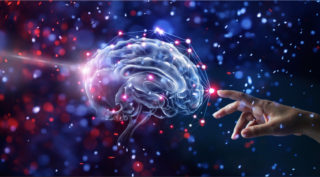 We realise that we can take steps to change this, and in doing so, reconnect with our body posture and movement.

So let’s trust ourselves a little more. Be kinder to ourselves. Learn to work with our own neurology, rather than applying even greater pressure to ourselves. It’s all there. Sometimes we just need a reboot.