We have unfortunately seen Andy Murray tumble out of Wimbledon for 2022, but it hasn’t been his performance that has caught my attention, but his hip extension. Or, more accurately, lack thereof. 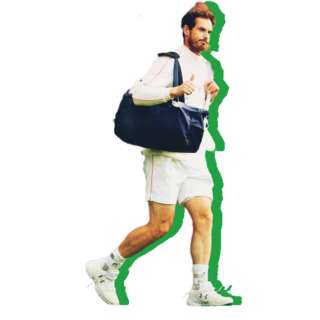 As I watched him stalk across the back line, trunk tipped forward, hips flexed, I became intrigued. It became a game to see if any hip extension would appear. Yet there it was consistently – the hip would get to about neutral and then he would break at the knee into flexion to take the pressure off. If I got a front view, occasionally that right hip would get around the problem by moving into internal rotation, (the principle of mobility – it you don’t have enough available  in one plane, your brain will find an alternative to get the job done).

What are the consequences when we lack hip extension?

In gait, we lose the integral support of the myofascial relationships across the front of the body, from the front of the thigh up through the hip flexors and across the abdominal wall heading towards the opposite shoulder. This creates a demand for more active muscle effort both to stabilise and generate power to make up for the loss of balanced tension in those interconnected structures. (Note the recent abdominal injury)

A lack of hip extension also biases the hamstrings to be more active throughout the gait cycle, as we see with Andy’s persistently flexed knees. This also makes it difficult for the glutes to play their part, as the pelvis is never truly carried over the foot.

What we don’t know is whether Andy has adequate hip extension when tested lying down. It is not unusual for me to see people who lack functional hip extension, but test perfectly well passively. It is a good distinction to make as it will then make clear where the focus needs to be.

In a nutshell, there are three possibilities:

How the body arranges itself when engaging with gravity. Now we are looking at the relationships from feet and ankles up to the rib cage. For example, when the rib cage tips up at the front as often happens in athletes interpreting “stand up straight, shoulders back”, the hips in many people are drawn back as the spine extends. They will usually present with chronically tight hip flexors, as the body position demands that the hip flexors play a bigger role. No amount of soft tissue stretching is going to sort that out until the global relationships are addressed. Here’s a link for that rib/hip relationship https://www.youtube.com/watch?v=QNOHn7hVW6U&t=55s

How the brain arranges the body to embody the mind and emotions in the situation. I don’t know how Andy would look on a day off – I have only seen him under immense pressure in the public spotlight. We all embody our thoughts and feelings, and it is possible that the posture we see is context specific. We would focus on how those contextual pressures show up in the body posture.

So, with a hip surgery behind him and an abdominal injury currently, Andy’s body is telling a story. It is all there to play for though – there are rich possibilities for change in the direction of greater ease and efficiency if a holistic, body-mind-emotion dynamic can be considered.

I really do hope that happens for him – his passion and courage has brought a lot of joy to the tennis loving public.

« « Tell your brain what you want instead of what you don’t | Real JEMS® People: Chris Gauntlett – Unlocking the Movement Puzzle » »
Blog Categories