Direction of the movement impulse

Have you ever thought about about what is happening in people’s heads in a yoga class?  Let’s face it: many people enter yoga thinking that it is a question of “how far can I reach”? However, to be safe and effective, a great yoga teacher will introduce the concept of “in which direction are you moving?” 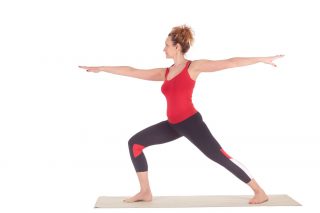 The concept is “direction of the movement impulse”.

These two pictures illustrate this simply. The practitioner in red is thinking of moving forward, which is drawing her into her knee. This shifts the load of her body weight into the front of the knee and away from the hip. The powerful glutes can’t contribute as much to share this load, but her front thigh will be burning from the work. 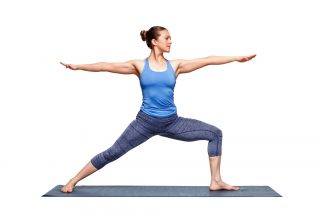 The practitioner in blue has taken up a slightly wider stance, but additionally, she has directed the movement intention for her front sitting bone downward rather than thinking of taking her whole body forward. In doing so, she shares the load between her knee and hip joints, her glutes can become active, and and the muscles on both the front and back of her thigh share the work.

People often think of yoga in terms of the poses, as if they are a series of discrete positions to aspire to. In fact, the journey into and between the poses is a rich area to explore, so that it truly becomes a movement practice. Clarifying the direction of the movement impulse may lead you into a different experience of familiar poses.

More of this approach to movement practices can be found in The Power and the Grace: A Professional’s Guide to Ease and Efficiency in Functional Movement.

« « Aspire to transcend an injury, not just manage it | Using your own sounds to improve performance » »
Blog Categories