Physiotherapist and JEMS® Certified Practitioner Ronja has kindly shared this story about using JEMS® with a kayaking friend: 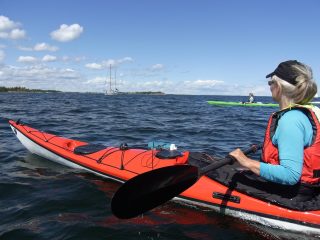 A friend of mine, Eva, was making her paddle strokes in a way that her kayak kept wagging from one side to the other. So instead of letting the water support her paddle, and her keeping her direction intention forward, she was losing forces into the frontal plane.  Watching her, I noticed she lost her CLA when she sat in her kayak, and she did not use any rotation when paddling. She used a bracing strategy to stabilise her trunk and was using her arms to create the strokes with the paddle.

We started on land, and she was given a postural balloon, first in standing and then in sitting on the floor. We did the test where you get stronger in your arm by putting on the balloon and losing your strength when losing the balloon (losing the CLA). This convinced her about changing her posture in the kayak.  We went on to do the ”thigh slides”, which worked a little better to one side, but mostly not at all. When given a cue with my hand on the forehead it got better, but as soon as I let go it didn’t. When watching herself in the mirror, all that came out was a lot of tension in her shoulder area and her whole body trying to help. So, from there we went on to rotation with connecting head, shoulders and pelvic, slooowly. In standing, sitting and lying down. It took her some time to work out how she could turn her head and the shoulders but still leave the pelvis behind. She needed the support from the floor to figure it out.

Coming back to thigh slides, it now was easy for her. Still one side did not rotate as well as the other, but very much better than before.  Afterwards, walking felt softer and lighter and it was easier to keep the balloon over her head.  She was given the three movements for practising at home, until the next time for kayaking was due in a few days.  On the water it showed straight away she had been doing her homework: no wagging from side to side anymore. After a few hours on the water she commented on feeling the muscles in her back and front of her trunk, and not feeling tired in her arms anymore.  So, with a working CLA and rotation in her trunk, and all the three levels connected, she was now able to produces the forces from her trunk and legs, and thereby support her arms to transmit the forces through the body from the paddle/water moving forward.

She has since then bought a new kayak, and is very happy: feeling better in stability, and with a new ability to go along with the “faster” kayakers.