Is Hip Thrusting Getting in the Way of Your Lifting??

A couple of years ago, I was speaking about movement efficiency at a conference, and challenged the common cuing of hip thrusting in the weight lifting/strength and conditioning realms. Howls of indignation followed as people defended their sacred cow, followed by spinoff rants in the twitterverse from people who confused the hip thrusting that they are vigorously performing lying down with weights over their hips with the movement involved in weight lifting technique. It was equal parts amusing and horrifying to observe the disconnect between movement and training that is accepted and perpetuated routinely in gym environments.

So let’s break down why I’m not a fan. This goes back some twenty five years, to when I treated my first weight lifter with an injured back. He had hurt himself power cleaning, and I was interested to know what his coach had told him to do. “Get my hips forward as fast as possible”, he told me. I asked him where he wanted the weight to
go. He said up. I drew an upward arrow on a piece of paper. Then I asked him to perform the movement for me, and asked him which way his body was going. “Up”, he said, quizzically. Really? Which way are your hips going? “Forward”. I drew a horizontal arrow on the paper. And where does that put your shoulders? “
Back”. I drew another horizontal arrow on the paper. So are you performing and up movement or a forward/backward movement? “Oh.”

Here’s the thing: think about the direction of movement impulse. You want the body to explosively unfold itself upwards in order to send the bar vertically, right? So let’s reimagine the mechanics of the lift. Imagine that you are a jack in the box, and a giant hand has pressed you down into your box. Your joints would fold like a concertina. If the giant hand releases you, you shoot back upwards, with your joints unfolding again. This is an upward motion.

Now let’s consider the common dogma. People focus on the idea that the hips are moving backwards and the shoulder forwards as the body lowers. They logically then think that to reverse this, they have to think about the hips coming forward. This is where the problem starts. You get caught up in a forward/backward motion, instead of channeling the up/down concertina, which coils the body in preparation and then allows you to strongly press through the floor and use your hip and knee extensors to power you upwards with a vertical movement impulse.

Driving the hips forward might bring your pelvis back over your knees, but it doesn’t create upward impulse. As the hips move forward, the shoulders countermove backwards. You get the load off the ground, but it costs you in efficiency. This is disadvantage number one.

Disadvantage number two is that it shifts you away from effective force creation. The ground is your biggest asset when you want to move upwards strongly. When you push into the ground, the ground pushes back. This stimulates the extensor muscles in the legs to contract strongly, so your movement initiation is from the strongest part of your body – your legs.

If you instead aim to thrust your hips forward, you take yourself off your feet and onto your toes early. Some people think this is a success, because they figure that they must have moved upwards more quickly if they are on their toes. Unfortunately, this isn’t the case – you have just shifted your centre of gravity forward, and therefore missed the opportunity to use the floor to push from, and the more effective leg muscle output that should be available to you. Disappointing, isn’t it?

Yes, in a great lift, you will end up fleetingly on your toes, but this is because the superb vertical force that you have created has drawn your whole body upwards and uncoiled your joints throughout the kinetic chain. It doesn’t happen at the beginning of the upward motion, but at the end, as the result of effective vertical power generation.

Finally, disadvantage number three is injury risk. Frequently lifters end up with a “break point” in the lower back, as they are unable to control against the forward horizontal force of the hip thrust, and end up subjecting the spine to rapid extension force. They attempt to counter this with more core training, but that’s what’s called wallpapering over the cracks. Instead of training to compensate for a poor movement, sort the movement out in the first place!

The argument I expect to hear is that if the hips start flexed, then we must surely extend them. I agree, but there are different ways to extend the hips. The classic gym hip thrust version takes the lifter into a backward pelvic tilt. People like it because it feels strong – the glutes contract hard in this position. If you want to lift heavier though, you need to be efficient. Efficiency isn’t about what makes things work harder. It’s about getting more for less.

I call this pelvic tilted version non-functional, or false extension. The reason for this is that it is very difficult to release the hips from this position to allow them to flex. If you are going to get under the bar, you need to be able to drop fast, and the backward pelvic tilt position blocks this. To get yourself out of backward tilt, you need to take your hips backwards first to unlock them, which compromises on the downwards potential. That’s a technical loss.

In contrast, functional hip extension means that the hips start from their flexed position and move in an upward and forward direction such that the pelvis arrives over the legs but allows the vertical force to continue to unfold through the trunk for a fraction of time before the quick drop under the bar. The hips are able to reverse their motion smoothly and rapidly. 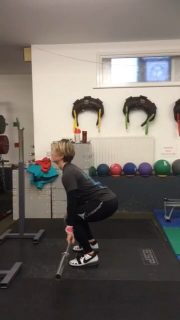 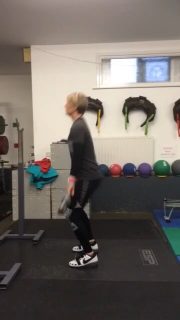 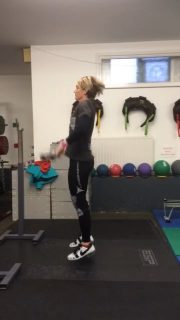 This is double Olympian, former World Top 10 and multi international medal winner in Olympic Weight Lifting Michaela Breeze demonstrating functional hip extension. The hips progress up and over the legs, rather than trusting forward. Note that the movement impulse can continue upwards through the body naturally. And if the weight is heavy? The body alignment and movement pattern is maintained, but the body line will appear to be tilted backwards to counterbalance the weight. The hip motion is not compromised. The movement relationships within the body stay the same, but the angle of the body with respect to the floor will respond appropriately to the load that the lifter senses.

This hip motion is simple but not necessarily easy to find if you have spent a lot of time thrusting.

To start the process, place your hands front and back around one side of your pelvis. Drop your weight by bending at the hips and knees to about halfway, then press through the floor with your feet, and up through the top of your head, like a piece of string being pulled at both ends. Feel how your hips arrive over your legs, with your shoulders stacked vertically. Repeat the movement and feel the connection through your feet, and how this makes it possible to use your whole leg effectively. This is the functional hip extension motion.

Now for comparison, perform the same set up motion with your hands around one side of your pelvis, but with your focus on a hip thrust. Can you feel the loss of upward thrust? Do it again. Which muscles do you feel? Do you feel your legs working as a coordinated whole, or just the thrusting glutes? Are you using the ground or skating over the top of it onto your toes?

Come back one more time to the first condition, functional hip extension. Feel how you use the floor, and a balance of leg muscles to create the upward motion.

Feel is everything – when you learn how to feel this vertical force impulse from the floor and up through your body, your brain can make the lightning fast adjustments to meet the demands of the load you are lifting.

This is going to feel weird to begin with, I know, especially when the rest of the weightlifting world is teaching a thrust. You know what though? Why not practice what the most efficient and effective lifters do?

* There’s no substitute for a great coach when it comes to technical movement. Top coach Michaela Breeze, herself one of the best technical lifters in the world during a stellar international career, understands this journey inside out, and knows just how to uncover your best movement. We had a lot of fun and a whole lot of collaborative learning together across her lengthy career, and there’s no one better to teach you about technique, programme planning, discipline and courage! Check out her website at www.powerposition.co.uk.

** Love the hip thruster exercise? It still has value, but only if performed well. To learn more,