Coach the spirit of the movement 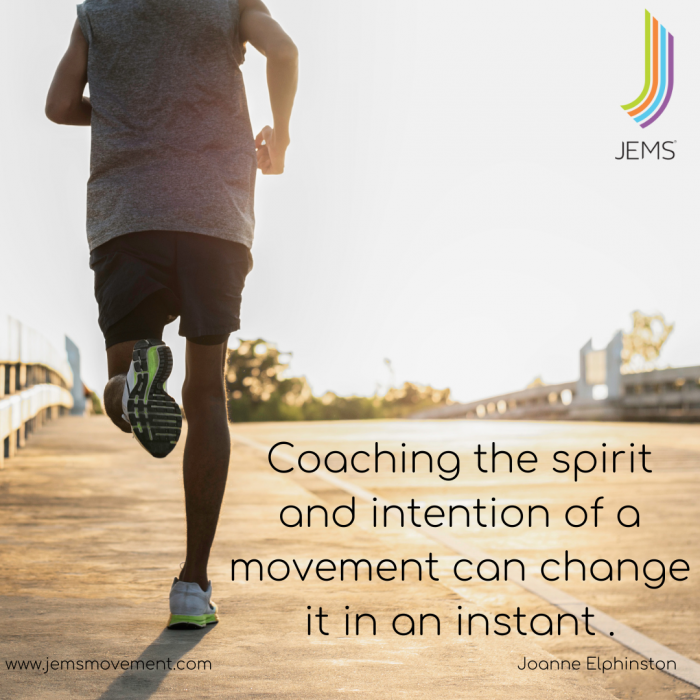 It is easy to lose sight of the big picture when teaching or coaching movement. We can clutter up minds with details, narrowing our focus and obsessing about correctness, all while losing the essence of what the movement is actually all about. It can make it all such hard work, and can end up creating contrived motion devoid of passion and pleasure.

The body has an inherent logic though, and the brain is very good at organising us behind a clear intention. Let me give you an example.

This week I met with a lovely patient of mine, who told me that he was having rising knee pain associated with running. We had done a bit on this before, and the running and previous knee symptoms had improved enormously, so I was a little surprised. Taking a look at the running, I saw more vertical than horizontal motion, more pogo stick than hovercraft. We spoke about this, and he said that he had been practising emphasising his leg concertina, the gentle rhythmic triple flexion which we had previously introduced in a separate drill to remind the body to share the support forces between his knee and hip. This explained it – that was a movement component, but it needed to be better integrated into the global movement. The concertina action is vertical, while the essence of running is the forward flow over the ground. He was loading those knees far more than was necessary.

So, after this little conversation, he ran again, this time embodying this forward flow, being the hovercraft rather than the pogo stick. There was an instant and significant reduction in the knee sensations, and suddenly he was covering the ground elegantly.

It was a simple, non-anatomical suggestion that connected his body’s logic to a natural task. These are those ahhh moments, where we remember the meaning and spirit of the movement, relinquishing our micro management and letting our amazing cerebellum organise us to express it more fully than we ever could do cognitively.