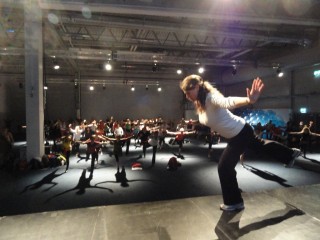 This week I was privileged to present several sessions at the 2000 delegate strong annual convention for Friskiis and Svettis, the largest group exercise organisation in Scandinavia.

I had not heard of the organisation when I was first invited, but after a little research I found out that one of their central mottos is that “it is all about the smile”. How could I resist that?

Further investigation led to the discovery that the instructors don’t do it for the money – these people genuinely have a love of what they do and a passion for making a difference, so it seemed like a natural fit for JEMS. And so, to Stockholm …

I was asked to deliver lectures and workshops on the subject of stability.

Now I have speaking on the subject of stability for a very long time now, but the message I am sending in 2011 is a very different one to that which I would have presented in the 1990s. Back then, the concept of central control to effectively manage the forces acting on and through the trunk was less familiar, and it helped to balance the strength theme that was so was dominant in the fitness industry at that time. This underpinning concept has not in fact changed, but the practical interpretation of it, the misapplication of research conclusions and the misunderstandings that have accompanied it have resulted in a “stability industry” which has created its own alternate reality.

Much of what I now see done in the name of stability completely misses the point, which is that stability is the result of multiple interconnecting systems in the body, not just specific muscle actions, and its role is to promote and support movement that is more effective, more efficient, and safer for the structures of the body. I’ll say it again: the point is movement. Most of what I see done in the name of stability these days is anti movement. People have become so concerned about “uncontrolled movement” that they fear what it is to move normally.

Here is the thing. Control is not supposed to restrict and constrain – it should be about freeing movement, optimising it, not blocking it. It should give a person more options. Mostly what I hear about stability is what it should stop from happening, instead of what it should make possible. I see an alarming number of people now with secondary problems as a result of this reductionist, restrictive vision. These “over controllers” have lost touch with normal movement, and every time they are asked to pull something up, pull something in or pull something back, just a little more is taken away from them.

This message could be a little traumatic for some people in the health, fitness or rehabilitation industries, but it absolutely does not have to be. With skilled cueing to unlock and create a directional impulse in the body, and a commitment to increasing people’s body awareness, it is possible to create better muscle patterning in almost any kind of exercise. This in turn stimulates stability responses that are relevant to movement itself.

The several hundred participants who attended the workshops this weekend were amazing – they came on a ride with me, exploring, connecting and experiencing how helping people to inhabit their bodies and feel good in them, systematically progressing for fun and challenge, and committing to quality can be a part of every class they deliver. They were all fantastic people with a holistic viewpoint and the confidence to step out of the traditional stability box and into beautiful movement. Bravo!

« « Musings on stability and movement: an interview with Joanne for Matt Metzgar.com | JEMS Scores with the FA » »
Blog Categories